Efforts from March 2022 to reject imports of Russian coal, oil, and gas have bought a renewed interest in “the need to take citizens along” on the energy transition journey as it duly shifted gear and focus within the western alliance.1

There is also a small but growing sense that suitably presented energy system models could usefully contribute to any new uptick in public engagement related to the energy transition — and thereby lead to better public policy outcomes and perhaps even improved public acceptance and uptake.

Most climate mitigation measures face stiff resistance from the public at large. Invariably the costs are salient while the benefits remain opaque. The issues are frequently complex. And a natural bias favors the status quo. Which together suggest that new ways to bundle and portray mitigation measures are needed, along with a greater emphasis on more immediate and identifiable non‑climate co‑benefits.

The proposition here is that model‑mediated public engagement might offer a bigger canvas on which to pursue the ideas just mentioned. And central to this suggestion are the types of relationships that could exist between the various stakeholders and interested or affected communities — and those undertaking the relevant numerical analyses. Regarding the terminology, stakeholders are normally limited to persons or organizations, so hence the need to include more broadly constituted communities in this context as well.

This posting therefore seeks to provide some conceptual brush‑strokes upon which to base discussions on the broad theme of model‑supported public engagement.

The ideas outlined here presume that the required components — source code, workflow tooling, datasets, and documentation — are readily available and open licensed for both use and redistribution in original or modified form (with the exception of high‑performance solver libraries which may need to be purchased under proprietary terms).2

Residing in the distance is the prospect of a knowledge commons for the energy domain — a coherent data store based on community curation, shared semantics, freely‑usable technical standards, suitable public licensing, and so forth. For comparison, not dissimilar to OpenStreetMap in terms of foundation concepts.

There are a number of underlying assumptions present in this posting that warrant careful examination. Particularly around the degree of interest that might exist on the part of the public and the efficacy of the interactions being considered. Hence the views presented might not be particularly correct or defensible or even usable.

Energy system modeling (ESM) is the process of investigating potential future energy systems using computer simulations. These replica worlds in silicon aim to capture the important connections and interactions present within current systems and some of the evolving dynamics as well. Those future aspects that cannot be suitably represented within the model are handled instead using speculative scenarios. With one scenario normally defined to portray political inaction and serve as a baseline for comparison.

The endeavor of modeling a given energy system and investigating a range of potential futures can be broken down as shown in diagram 1. The modeling chain steps from framework to base model to scenario creation to execution and then to comparative analysis and interpretation. 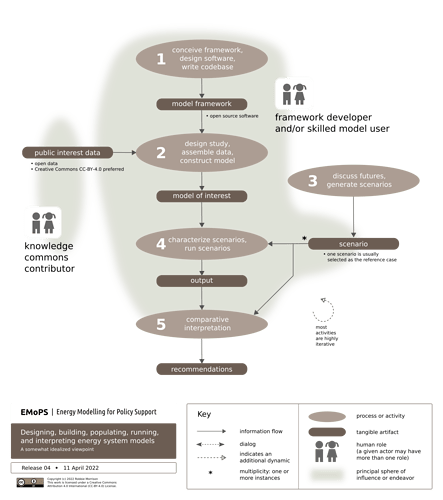 A number of ESM frameworks have been developed with particular characteristics to cater for different energy systems and diverse research questions — the details of which are not relevant to this discussion (refer to wikipedia instead).

Energy system modeling for policy support has, for too long and too often, been a fully closed door affair.

For instance, the energy system analysis that primarily influences the United Kingdom government is essentially the preserve of closed models (including UK TIMES), closed datasets, and a select set of government departments and research teams who collaborate in private. Indeed very little of this activity enters the public sphere, as explained in this online video from early 2022:

The situation is Germany is quite similar too. A limited number of research institutes provide reports and advice to government ministries on invitation using closed models and datasets. These practices also involve, somewhat perversely, little to no reference back to the published academic record either.

But in Germany, in particular, there is an emerging and vibrant open energy modeling community. One that spans a number of mature framework projects plus community‑wide efforts to tackle the shared agendas that apply to public interest data. These latter issues include consensus semantics, metadata standards, data licensing practices, data management, information provenance, virtual infrastructure (a superset of data portals) bridging multiple data servers, and ultimately the knowledge commons mentioned in the introduction.

The situation in the United States is also somewhat similar in this regard. A number of established open modeling projects are under active development and some have also been used within public regulatory processes (for instance SWITCH in California). Energy sector data in the US is less likely to attract intellectual property protection due to differing legislation and legal traditions. And there are now several projects focused on collating the open data required for open modeling in the US context as well.

Policy development transparency and related quality assurance represent one side of the open modeling ethos. The flip side is that open development offers a potentially very much more effective and rapid process for advancement. Particularly when the social benefits of sharing code and data are recognized, third‑party reproducibility and verification become the norm, and legally unencumbered data and data standards can sustain a knowledge commons.

Historically there seems to be more interest in the use of environmental models to engage with stakeholders than with energy system models (see further readings below). This may be driven by a necessity to facilitate permitting in the case of environmental models — and thus materially different from the desire to improve public policy formation in the case of energy system models.

A revised paradigm for public engagement

The following diagram is an attempt to visualize aspects of the revised paradigm for public engagement being pursued in this posting — one which spans both transparent policy development and open science methodologies. 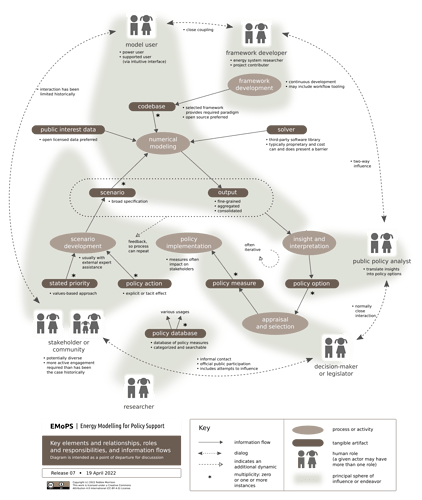 Diagram 2 indicates what might constitute the main building blocks for energy modeling for policy support (EMoPS) under stakeholder and community engagement. The diagram is not differentiated in terms of type of participant by role however — for example, stakeholders and communities are simply lumped together as one icon.

Policy options can also be classified and databased, as also noted in diagram 2. For example, Best et al (2022) describe a newly established database containing energy sufficiency measures. There is often a strong connection between public policy measures and individual scenarios. Indeed, scenarios may embed both conventional and novel policy measures under either explicit or implicit formulations when seeking first‑cut estimates of their potential effectiveness.

A further question is whether the kinds of engagement depicted are best served in‑person or online or some hybrid. And the preferred solution will doubtless vary by context.

As indicated, stakeholders tend to be more easily defined and identifiable, whereas communities tend to be more diffuse and arguably more difficult to address. Here the placeholder SAC stands for “stakeholders and interested or affected communities”. The tag “interested” is included to reinforce that a given community need not demonstrate some kind of formal legal interest in proceedings.

These ideas and the material in this section nonetheless remain speculative because a proper and reflective audit would be required to identify SAC and form concrete recommendations as to the best channels, interfaces, and forums through which to interact.

The process of engaging with stakeholders in the context of project permitting, legislative development, and similar is well established. What is not nearly so common is a structured dialog when examining overarching directions of the sort traversed in the Brundtland Report (WCED 1987) for instance.

The central idea here is that energy system models can be used to engage communities of interest in particular and contribute to a more sophisticated understanding and discussion of the issues involved. On that note, the Brundtland Report highlighted a vital need for the active participation of all sectors of society in consultation and decisions relating to sustainable development. Arguably, very little of that ethic has come to pass in interactions involving the energy sector, anywhere in the world. And with the full 2022 IPCC report now released, the necessity for broad public engagement is becoming increasingly clear.

The role of values in these processes is a central matter too, one that Stewart (2009) also traverses.

Citizens’ assemblies (CA) using model‑meditated analysis have been proposed but none have run at the time of writing (mid‑2022). CA bring randomly selected citizens together to deliberate on an important and topical issue. In this context, CA cover communities in contrast to processes that only engage stakeholders, who are, by definition, self‑selected, motivated, and normally bearing predetermined agendas. 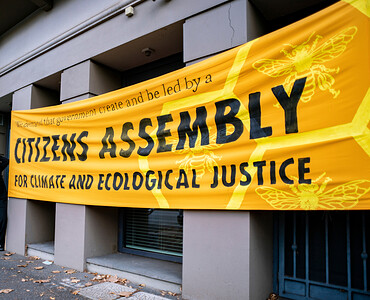 Image 1: Support for a citizens’ assembly in France by members of Extinction Rebellion in Australia in May 2021 (Matt Hrkac, CC‑BY‑2.0, source).

Some countries have special consultation obligations with indigenous peoples. For instance, tangata whenua in New Zealand have special rights under the Resource Management Act 1991 for consultation with The Crown — in effect, senior ministers. Indeed, model‑mediated engagement can clearly play a role here too.

The use of “toy” energy system models also deserves coverage. Some argue that simplified models have a place in terms of insight, particularly if users can easily vary the input parameters to their liking and gain rapid feedback. In this regard, derived AI models may have a place.

To briefly note work on stakeholder engagement being undertaken at Simon Fraser University, TU Delft, and NREL and through the SEEDS and SENTINEL projects. Several initiatives utilize the Calliope framework (Pfenninger 2021).

The ideas presented are intended as starting points for discussion. There are a number of unexamined assumptions and unexplored details. Notwithstanding, there are essentially two sides to the general proposition being pursued:

On the first point, energy system models are now sufficiently well developed to contribute, but would nonetheless benefit from improvements to the user friendliness their information flows and depictions. In a wider regard, several framework projects are now seriously addressing model usability.

Detailed work is clearly needed to identify the potential relationships between stakeholders and communities on one hand and modelers on the other. And the kinds of channels, interfaces, and forums that would best facilitate useful communication and collaboration.

Regarding the energy transition to net‑zero in general and to be blunt: this entire exercise needs to combine open science and transparent policy analysis and then recognize that well designed and sincere public participation represents the best means of securing citizen input, aiding political legitimacy, and hopefully underpinning widespread public acceptance and adoption.

And yet the official practice in key western countries is the diametric opposite: the policy formation process is almost entirely closed, much of the data remains undisclosed or paywalled, and the conducted analysis is almost completely disjoint from the efforts and insights arising from practitioners from within the open energy modeling community (with the 2022 IPCC WG III report and appendixes representing a small but welcome exception in this regard).3,4

Furthermore, in the United Kingdom and Europe, much of the officially published energy sector data (my estimate is two‑thirds) may be legally encumbered and not available to promote open analysis or to contribute to an emerging knowledge commons.5 Moreover, this uncertainly over intellectual property status provides a perverse incentive not to track provenance and otherwise practice good data governance in an effort to reduce exposure to civil litigation.

3. The New Scientist magazine is, as of April 2022, engaged in legal proceedings against the UK government to force disclosure of the official spreadsheet that breaks down national decarbonization targets by sector and industry (Vaughan 2021). Only the overarching aggregate goal was made public.

5. The principle issue is the European Union 96/9/EC Database Directive and its transposition into national law. These provisions persist in the United Kingdom, although, post‑Brexit, the UK parliament could simply repeal the relevant clauses.